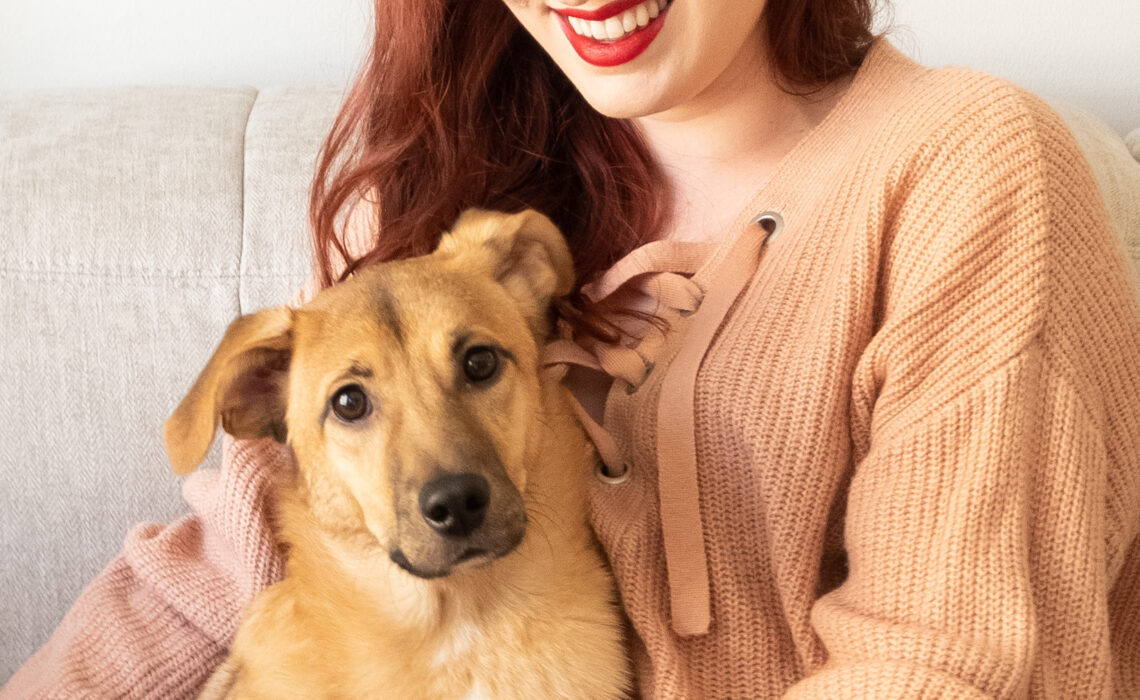 Oh, Olympia. Found in a sack and dumped in the woods with her sibilings to be left for dead, she had a rough and unjust start to life. But thankfully, they were discovered and brought to Wild at Heart Foundations’s partner shelter in Greece. And Olympia’s story got a happy ending…

Olympia is such a sweetheart of a dog, scared of her own shadow when she came to us but now she’s in a house with both dogs and cats! She shared a lot of similarities with Vincent at first. She wouldn’t even come out of her crate when we picked her up. (Yes, another service station date night. I know you’re jealous.) The poor driver had to climb in the crate and get her. She was terrified. One thing she loved was being outside in the sunshine so we spent a lot of time sitting outside letting her take in her surroundings.

She was skeptical of men, apart from Rich (the dog whisperer), and was attached to my hip. She followed me around and spent most of the day hiding under my desk, until…she discovered the sofa. She absolutely loved all the cozy naps spots in the house. She quickly spent her day moving from sofa, to guest bed, to dog bed and back again. But she was still slow to open up to Seeley, who after Cinnamon, thought every dog would be his best friend. But she slowly came around to playing. In the end, she was the one bothering him to play! As her personality started to develop we discovered she has a unqiue trick: she smiles!

Soon our days were filled with Olympia smiles and zoomies. One minute she was running with Seeley and the next she was cuddling Kendall on the bed. She truly had the best of both worlds. As her personality came out we were sure she would be snatched up but week after week she remained. Olympia has been our longest resident at 15 weeks and if it weren’t for our Christmas plans she most likely would have been with us for another eight weeks before she was adopted.

Olympia had one of my favourite personalities, watching her foster highlight on Instagram is quite the journey. She changed so much and it was incredibly difficult to say goodbye after such a long time getting to know her. But like all the others, we did our part and she moved on to a great home.